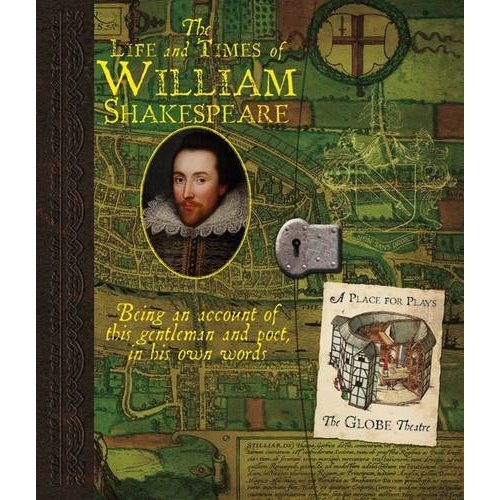 Gr 6 Up–This handsome biography, designed as a scrapbook that Shakespeare kept for his daughter Judith, is presented as “a recollection of his years and works…upon the eve of his departure from London to retirement in Stratford-upon-Avon.” The portfoliolike volume is filled with facsimiles of documents, writings of Shakespeare’s contemporaries, and synopses of his plays, all helping to piece together the facts of his life and the mores of the day. The “autobiographical” writing is laced with vocabulary that captures the flavor of the period, while the authors’ informational sidebars use straightforward, clear prose to complement the flowing narrative. Historical details abound, not only in the text but also in the carefully selected “documents” that adorn the book, permitting readers to pore over everything from Elizabethan “Child-Rearing Advice” to period “Siege Engines” to a “Glossary” of types of thieves. While the basic facts of any well-written Shakespearean biography can be found here, this work also discusses his opinions of his friends and rivals, reveals his deep feelings, and conveys misgivings about some of his life choices. Abundant humor, quotes from Shakespeare’s works, and some lesser-known facts add interest to the familiar story. Illustratively, the book is a feast for the eye, with backgrounds composed of high-quality period prints, paintings and sketches, and numerous fold-out facsimiles that pop out from the double-sided pages. Berk and McDermott offer a new perspective on the bard–that of the aged genius looking back on his life and career. Shakespeare lovers and teachers will be delighted. 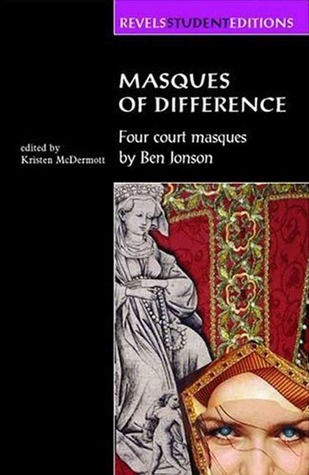 Masques of Difference presents an annotated edition of four seventeenth-century entertainments written by Ben Jonson for the court of James I. These masques reflect both the confidence and the anxieties of the English aristocracy at a time when notions of monarchy, empire, and national identity were being radically redefined. All four masques reflect the royal court’s self-representation as moral, orderly, and just, in contrast to stylized images of chaotically (and exotically) “othered” groups: Africans, the Irish, witches, and the homoeroticised figure of the Gypsy.

“Angels and Ministers of Grace: Theatrical Superstitions through the Ages,” Realms of Fantasy Magazine (March 2005), reprinted on the Endicott Studio’s onlineJournal of Mythic Arts.

“’To blanch an Ethiop’: Jonson’s Masque of Blackness and Multicultural Approaches to Early Modern Literature.”  Language Arts Journal of Michigan 18.1 (2002): 18-24.

Letters from an American

A Clerk of Oxford

A Library of Literary Interestingness